So I had one hell of an adventure cycling to Paris in aid of Croí Heart & Stroke Charity!

The story of my cycle reads like one of lemony Snicket’s books! However, the more challenges overcome along the way the more rewarding the goal!😁 I managed to cycling just shy of 700km and raise just over €800! A big thanks to everyone who supported me! Especially Amy Joyce for the moral support along the way. Also, I’d like to thank West Side Cycles who were very helpful in the preparation for this trip!

So I suppose he best place to start with the summary story is at the beginning!

I left Galway on Friday the 16th of march from the Croí offices at around 4pm. I cycled approximately 40km that evening back to my parents place which is in the general direction of Rosslare. The weather was lovely and spirits were high! I enjoyed the cycle and I was home before to late. The following day however was a harrowing physical challenge and by far the hardest day of the whole trip. I cycled 140km to Kilkenny, which in of itself wasn’t much further than I cycled any other day of the trip. What I hadn’t accounted for was the sheer strength of the wind! It was blowing in my face the whole way. Progress was slow and I had to cut my breaks short to try and keep on schedule, it didn’t work, I was late and it got dark very quickly. Then it started snowing. Not heavily or anything, but visibility was VERY poor! Luckily I had invested in an extremely high vis jacket so I was still visible to motorists, however I couldn’t see very well by the light of my bike. (Which is designed to let others see me, not to see by) Due to the uncomfortable situation I found myself in I dug deep and pushed hard to get there as soon as possible. As a result I was utterly exhausted when I did get there! Being my 1st proper day of cycling and being so tired already I started questioning if I was really ready to do such a trip.

The next morning I woke up to a scene from Lapland or something. Overnight several inches of snow had built up and the roads were icy. I probably could have made it to Rosslare but I never would have managed to cycle there in time for my ferry. Also, it would have been needlessly dangerous! I made the hard call that I needed to resort to public transport! I got the train to Waterford and then a bus to Rosslare, where I got my ferry.

The ferry trip was very enjoyable and was just the rest I needed to raise my spirits and feel like I could complete the challenge after all!

However, Murphy’s law was far from done with me!😅

Without going into to much slanderous detail about what phone company and why, my phone was rendered useless as I couldn’t avail of roaming or internet. I was limited to WiFi. Additionally, when I arrived in Cherbourg I arrived to blizzard conditions!

Without internet to update my Google maps I navigated the 20km to my airbnb mostly by memory! Which wasn’t easy as everything looked different in the snow. At one point I tried to connect to WiFi, it was a pay x amount for 30mins deal. However it had to send you a verification code by text and by email.

Now I wasn’t receiving texts and he reason I was trying to connect to the WiFi was because I’d no internet. For approximately 1 minute after paying my phone appears to stay connected to he WiFi before it realised that I hadn’t inputted my verification code, so I paid 3 times hoping the email would come through and I’d be able to connect. This was unfortunately not the case! Regardless, I found my way to the airbnb and I connected to the WiFi just to receive an email saying my bank account had been blocked due to multiple small transactions in a small space of time (Fraud prevention)! So to sum up,  my phone wasn’t working, my bank account was blocked and I had been almost lost in a blizzard in the middle of the French countryside!

I was fit to give up at this point but thanks to encouragement from Amy and the fact that it only took a quick email to unblock my bank account I decided to stay going.

The following day the snow cleared almost immediately. However Google maps decided that roads were for tourists! The routes that it brought me down were almost impassable. I had to dismount and walk my bike up a “trail” that was to overgrown to cycle and then later a road gradually changed from road to dirt track to trail to RIVER! I actually cycled up a stream for a few metres, the alternative being turn around and go back about 8km! The water was about 8″ deep and my shoes got thoroughly soaked despite being on my pedals! I meant to head down to Omaha beach for a look but at Carentan I got my first puncture of the trip. Combined with the delay from the “trails” in the morning I had to take a short cut to stay on schedule. The rest of that day went smoothly and I actually felt quite well rested upon my arrival in Caen!

The following morning was yet another challenge, Google maps insisted on bringing me down some 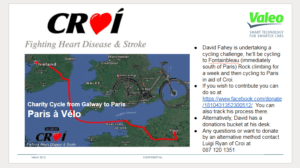 more “cycling trails” and at one point one “trail’ became completely impassable for someone with a bike. The trail had changed into a gully between two fields and someone had dumped huge piles of cobbles into it! I was forced to climb out dragging my bike and go through the field to the nearest road. Trespassing unintentionally!

From that point I ignored Google maps and just checked the map myself at every junction. This slowed me down severally! At the next break town I found WiFi and recalculated my route but told Google maps I was in a car but to avoid motorways. Which it did, mostly…..

I started to make great headway as the roads were really good and were slightly downhill! So at my next break point instead of stopping for a while I just had a quick sip of water and threw my bottle into my waterproof bag along with all my electronics. Two hours later I found a 2L puddle in my bag along with all my electronics! I’d been making to much headway to be brought down by this so I tried things as best I could, flipped my bag inside out, threw everything back in (except the water) and continued on my way!

Again I was making huge headway and spirits were high! Until a car pulled up beside me and yelled “c’est une autoroute! Quittez la route!”

“It’s a motorway! Get off the road!” The road had started off as a regular road and had gradually changed into a motorway, I’d been making such good headway I hadn’t noticed! Nor apparently had Google maps!

Anyway, this added about 10km to find another route but all in all it had been a good day and I had made it all the way to Alençon!

The following day was the 2nd most challenging day. It was day 3 in a row of 120km distance. What I knew about it was that the city I started in and the city I was to arrive in were at approximately the same altitude. So despite the morning of cycling up and down hills, when I was far behind schedule I couldn’t figure it out.

I kept asking myself, “You are going downhill here as much as you are going uphill, why is this taking you so long?” I’d no answer so I just kept plugging along, barely taking breaks in an effort to catch up. It was in vain and with only 2 hours left of sunlight I arrived at the two thirds mark. I was seriously doubting myself again. Was I really so tired that the 88km or so had taken me all day? What time am I going to arrive at my hotel? Am I going to get enough sleep tonight to be ready for tomorrow? Am I really up for cycling in the dark again like I did outside Kilkenny?

Anyway, I had a quick break and then forced myself to stay going. I was only cycling for 5 minutes when I found out the truth. The entire morning I had been cycling gradually further and further uphill and the whole evening was a nice even slope downhill for 40km! I flew most of the remaining kilometres to Chartres! I even had to stop for puncture number 2 and I still made great time! Upon my arrival I was extremely happy because I was literally and metaphorically over the hill! The vast majority of my cycling was completed and I had only 80km to do the following day to where I’d be staying for a week to do a bit of rock climbing!

The following days cycle went smoothly and I arrived at my destination without any further problems!

I’d left Croí at 4pm on Friday and arrived in Fontainebleau at 3:30pm the following Friday! I’d essentially made it! I only had a short distance to cycle to Paris a week later and I now had some time to relax in the sunshine and climb with some Friends!

The sunshine lasted until Tuesday and then the rain came. I spent 2 days doing nothing in a hostel before deciding to return home early. I moved my ferry 2 days forward and prepared to cycle to Paris… 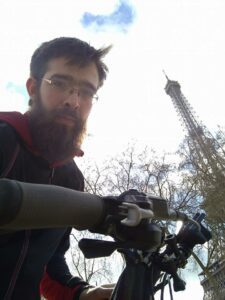 The problem was I didn’t have time to cycle the whole way there and still catch my train back to Cherbourg. I cycled about 20km Then got a train the rest of the way. I’d (almost) completed what I’d set out to do! I had cycled most of the way to Paris and I think the adverse conditions that I did it in makes up for the few kilometers that I skipped out on!

In conclusion, it was a great challenge and all the things that went wrong just added to the sense of adventure! The physical part of the challenge wasn’t as hard as I expected it to be, but there were mental aspects I hadn’t even considered. Such as the almost agoraphobia that sets in when you are cycling on a road from horizon to horizon bound on either side by endless fields that don’t even have hedges! The only thing breaking the endless land is the odd tree or wind turbine! It makes you feel like you’ll never get anywhere! 😅

Or just the fact that every evening is haunted by the knowledge that you have to do the same the following day!

It was all well worth it and it was good to learn that I had the mental fortitude to keep going!😁

I am sure I will be doing something similar again VERY soon!😁 Of course the fact that I was doing the whole thing for a good cause was a major source of motivation for me! I recommend to everyone to check out Croí for their information and services in regards to heart health!

If you would like to support Croí and organise your own adventure for Croí please contact Luigi@croi.ie we will support you all the way!