Day tripping along the Wild Atlantic Way – the best medicine!

‘Breathe deeply of the sea air as you enter Rosmuc!’ Peter O’Malley proclaimed as Donoghue’s Bus rolled into Pearses Cultural Centre in Rosmuc, ‘There is nothing like it anywhere in the world’ beamed the proud Connemara man!

And he was right, we were on the Croí Stroke Support Group Summer Outing 2018, it was a stunning  day in the month of June, the sun shone brightly as we took his advice.  You can take the man out of Connemara but you can’t take Connemara out of the man! Peter knew every bump and hillock, he knew who owned every house and piece of land along the road from Maam Cross to Rosmuc and regaled us with stories to match, of weddings and wakes from bygone days and in between gave us a few bars of his favourite tunes as Gaeilge! 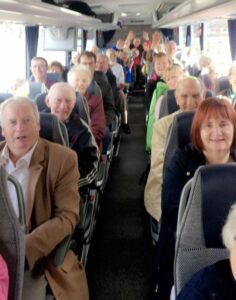 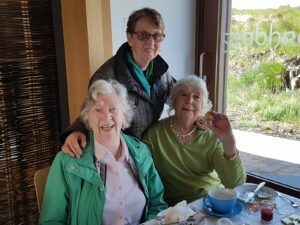 The Stroke Support Group summer outing has been a constant in the Croí calendar for many years now, recently the group have visited the Cliffs of Moher and the Museum of Country Life in Castlebar.  This year they opted for Pearse Cottage, now the Pearse Cultural Centre (Ionad Cultúrtha an Phiarsaigh)  located in Ros Muc, in the heart of the Connemara Gaeltacht, on the Wild Atlantic Way. The Visitor Centre houses a fascinating interactive exhibition dealing with Pearse’s legacy and exploring the things that drew Pearse to Connemara: the area’s unique landscape and history, and the ancient Gaelic culture and language which is still alive in the area today. The building itself is truly a 21st century structure but respectful of its location and the landscape in which it resides. Inside we were treated to a mouth-watering array of pastries and cakes and the welcome aroma of freshly brewed tea and coffee provided by Martin and his staff in the café @maiziegourmet.  After we had enjoyed our repast, the group took some time to take in the interactive exhibition at the centre before taking a short stroll through the bog path to visit Pearse’s Cottage, which is just as he left it in 1915. 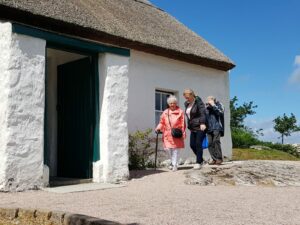 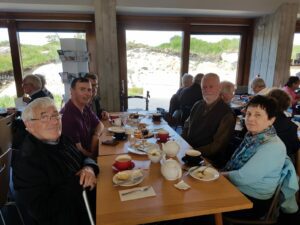 Then it was back onto the bus and off to the Coral Strand (Trá an Dóilín ) one of Connemara’s finest blue flag beaches. Sitting at the mouth Galway Bay, the strand is a series of small coves nestled between rocky outcrops. We eagerly hopped off the bus, pulled off our shoes and socks and spent a very enjoyable hour walking along the water’s edge, breathing in the Connemara air that Peter spoke of so highly.  Our very patient bus driver Joe eventually indicated that we had better get going if we were going to be in time for  lunch at the Connemara Coast Hotel!  Peter and Gerry led the sing song on the way to Furbo where we were warmly greeted by the staff at the Connemara Coast Hotel (@connmearacoast) and  served a scrumptious lunch with all the trimmings as we sat back and enjoyed the vista from the dining room and the serenity of the Wild Atlantic Way. Nessa Heaney captured the sentiment of the day as she toasted ‘good friends, camaraderie and beautiful Connemara…. the best medicine’ 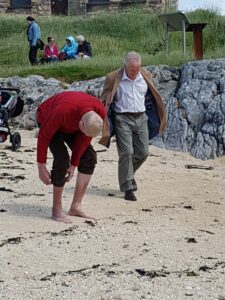 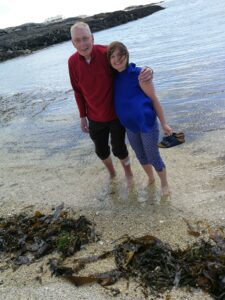 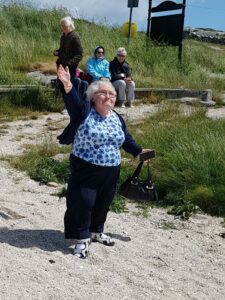 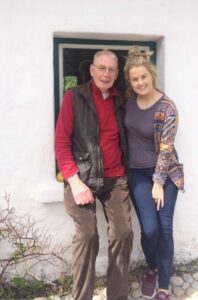 “It is the the little things that make a big impression and the Croí Stroke Support Group would like to say a big thank you to all who paid such attention to detail in ensuring that the group got maximum enjoyment from the day. Some of us do not move as quickly as we would like any more and living a life after stroke can mean that things take a little longer to do and in that regard Joe, our driver, at Donoghue’s Bus, deserves special mention,  he  is truly a gem, he was so kind and caring to the group.  Thank you also to Dáire and Martin and the staff at Pearses Cultural Centre and Café and to the staff and management at the Connemara Coast Hotel who looked after us a so very well.”
– Feedback from a member of the Croí Stroke Support Group.

The Croí Stroke Support Group meet at Croí House on the second Thursday of every month and new members are always warmly welcomed, call Jessica on 091 544310 for further information.